At Risk: Robb College by Michael Dysart expected to be demolished

As reported on NBN news, “After five years of consultation, the University of New England says it will proceed with the replacement of Robb College.

It was closed in 2014, due to its age and has remained vacant ever since, while a heritage listing proposal was assessed.

The New South Wales Heritage Council has confirmed it will no longer be pursuing the proposal.

Docomomo Australia and the AIA have made submissions to both the University of New England and the NSW Heritage Council.

The Robb College was originally designed by Michel Dysart for NSW Government Architects in 1960. The building was completed in 1964.

The submission advocated the significance of the building as

“Robb College is one of the first modernist college buildings to be erected on a university campus outside of Sydney. The use of the traditional quadrangle form widely employed for university colleges shows a renewed interest in the use of the Oxbridge model, rather than the American type campus planning of isolated buildings set in parklands.
The design is significant for the reinterpretation of details of the state’s significant public buildings and is one of a series of highly individual university buildings designed by the NSW Government Architect’s branch in the late 1950s and early 1960s. It is also a significant example of the work of Michael Dysart.”

You can download here the text of an interview with Michael Dysart about the Robb College published in 2010,  50 years after the building was designed.

On that occasion Dysart gave a lecture titled “The Manifesto of Natural Materialism: The Design of Robb College”, which, commented the UNE’s blog,  recounts his initial impressions of the University and the architectural influences that shaped his design for UNE’s most distinguished modern movement building.

In 1958, twenty-four year old Michael Dysart, newly graduated from the University of Sydney, was awarded a cadetship with the NSW Government Architect’s Office. One of his first jobs was designing a college for the University of New England. Established as the “Third College” after Wright and Mary White, Robb College was named in honour of William Menzies Robb, the first Registrar of the University. Although the project had a tight budget, Dysart showed great skill in avoiding bland homogeneity by creating a series of distinctive spaces. His work on Robb College received high praise in architectural circles, including from the influential critic Robyn Boyd, and attracted national attention. Dysart went on to enjoy a very successful career with a practice spanning domestic, government and commercial work.

During that lecture, on November 23rd 2010, Dysart commented:

“It is worth remembering that Ted Farmer was the seventh Government Architect beginning with Francis Greenway and the rich colonial history of both country towns and the city was fertile ground for introspection, analysis and an awareness of an Australian vernacular born of necessity. This questioning of slick modernism led to a tongue-in-cheek Manifesto of Natural Material in the Design Room at PWD. There was an element of seriousness in the jest and in my case, that materials should be true to their nature and reflect the language of construction reality.”

“It is worth remembering that in 1958 the availability of funding was tight and postwar austerity was still a reality. The Design Room under Harry Rembert was very conscious of the ethos that good design should be timeless and not dependent on excess or fashion. Harry’s own work was a benchmark for us, buildings such as Wallace Theatre at Sydney University and the School of Automotive Engineering and his own house at Wentworth Falls. I remember developing our own tongue in cheek credo i.e. THE MANIFESTO OF NATURAL MATERIALISM – with a set of some ten objectives.“

“In retrospect Harry was certainly influenced by the Dutch architect Dudok who, like Rembert, remained a public servant all his life and designed some memorable public buildings in Holland.
To us as younger architects the Scandinavians such as Asplund, Aalto, Jacobson and Utzon were more on our wavelength than the Bauhaus tradition or Dudok.”

“The use of natural materials was another fundamental in the design of Robb College in accord with the “Manifesto of Natural Materialism.” however there was an element of seriousness behind the jest. From my perspective the materials should remain true to their use without any artifice or cosmetic concealment” .

On Robb College see also in the article Brutalism with a Human Face. Case Studies of the Interior Architecture of Five NSW public buildings. 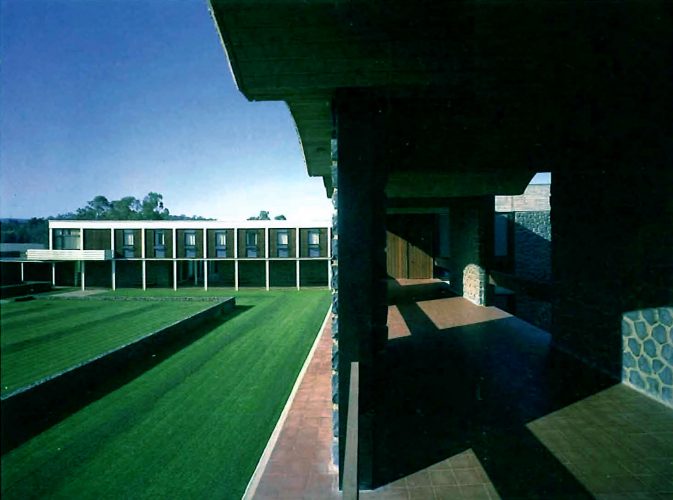 a silent video of the college published by NBN News.com.au

UNE’S ROBB COLLEGE SET TO GET A FACELEFT