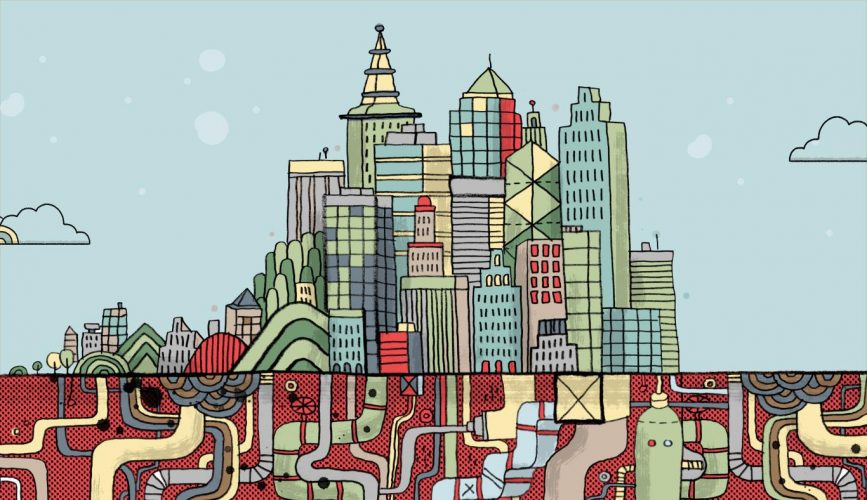 Sydney Living Museum
15 December 2018 – 21 July 2019
Explore the city inside and out, top to bottom in a whole new way! From sewers to skyscrapers, this interactive exhibition reveals the secret workings of the city.

Enter an immersive cityscape full of magical, tactile experiences to discover how the city works. Peek inside buildings, duck underground, and explore the streets to find out what’s going on above your head and beneath your feet.

This spectacular exhibition is currently being developed in collaboration with illustrator and city fanatic James Gulliver Hancock, and is adapted from the bestselling book How Cities Work from Lonely Planet Kids.

See and hear the city come to life with interactive animations, bustling sounds and something new to uncover on every street corner.

Pop on a hard hat and step onto a lively construction site, design your ultimate building of the future or make the city move from day to night at your fingertips. What will you create? It’s the city as you’ve never experienced it before!

James Gulliver Hancock’s obsession with re-imaging his world has seen him work for major print, TV and music publishing releases including: Coca-Cola, Ford Motors, Herman Miller, Paypal/Ebay, Caterpiller, The New York Times and Simon&Schuster. He has participated in projects in the USA the UK, Indonesia, Austria, Germany, France and Australia, taking his whimsical perception around the world.

He grew up in Sydney, Australia, and studied Visual Communications at the University of Technology, Sydney. In kindergarten he remembers devising the most complex image he could think of … refusing to move on to the next activity after painting, instead detailing a complex drawing of a city of houses including every detail, every person, and every spider web between every house. He still has the drawing.