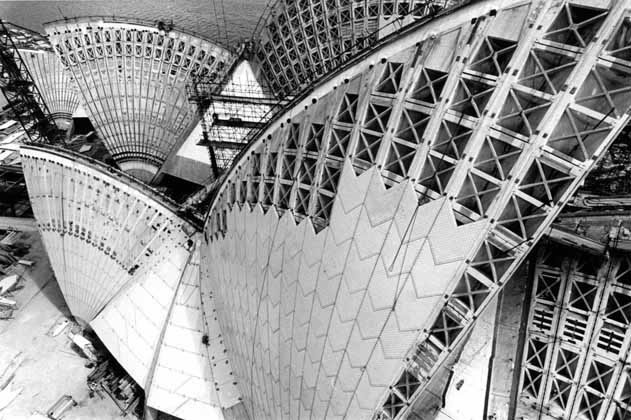 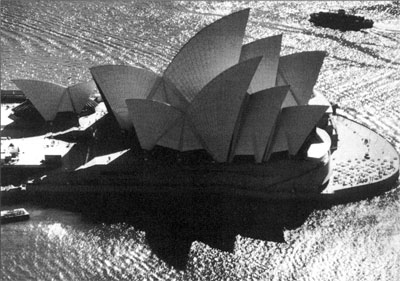 ‘In the Sydney Opera House Jern Utzon realised the great synthesis of earth and sky, landscape and city, vista and intimacy, thought and feeling, in terms of a unity of technological and organic form.’ wrote Christian Norberg-Schutz in 1995. In 1957, the Danish architect Jern Utzon won the international competition to design an opera house on a peninsula in Sydney’s inner harbour, overlooked from the Sydney Harbour Bridge. The design was elaborated over subsequent years resulting, in 1961, in the solution of shells derived from the surface of a sphere of common radius, each vault of precast rib segments radiating from a pedestal. Stress between architect and client forced Utzon to leave the project in 1966 at which stage the monumental podium and soaring shells were in place; the remainder was completed by architects Hall, Todd and Littlemore with newly designed interiors and glass walls. Since its opening in 1973, the Opera House has, nonetheless, been a spectacular success as a venue for the performing arts. Its significance relates to its embodiment of the integration of sophisticated geometry, technology and art and the seminal nature of its sophisticated design and construction techniques. It is important as the expressive culmination of the philosophy of modern architecture and within its ancient harbour setting, as a cultural icon of the twentieth century.