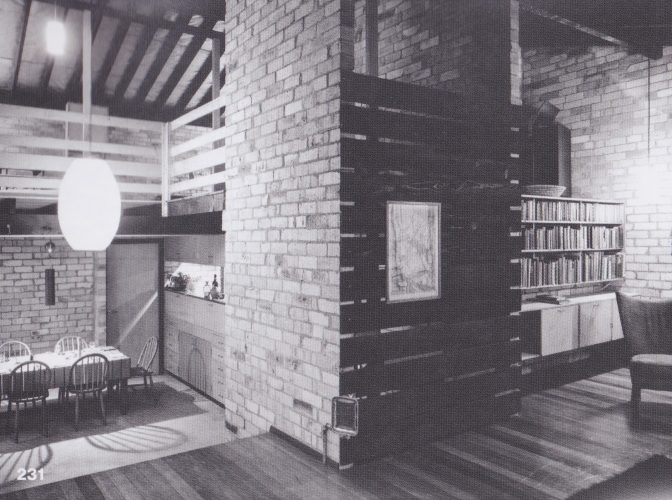 A seminal house of the late 20th century Sydney regional style.
A very sculptural house greatly affected by its steep, stepped site. It is an unsophisticated design employing cheap bricks, off-saw timber and common roof tiles. It became an incipient part of the Sydney School style (since also called ‘Sydney Regional’). This building is designed in the Late twentieth Century Sydney Regional style.
At the time this house was described as ‘Brutalist’ (Taylor, an Australian Identity) but the passage of time has revealed that the design, by virtue of characteristics such as its exploitation of a difficult site, the face brickwork and stained off-saw timber, was a seminal example of the ‘Sydney School’ or late 20th-century Sydney Regional style. Moore’s philosophy included the epithet ‘Materials should be used as they exist – materials for their own sake’.
(NSW Office of Environment and Heritage)

Tony Moore Biography
Tony Moore (1925-1972) was a Sydney architect who has been identified by historian Jennifer Taylor as the author of Australia’s first ‘Brutalist’ house. He was a leader of the Design Group before he joined McConnel Smith and Johnson in 1959.