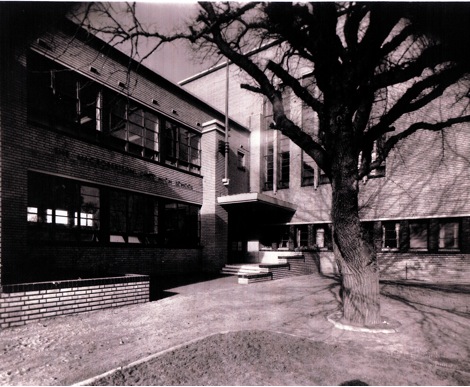 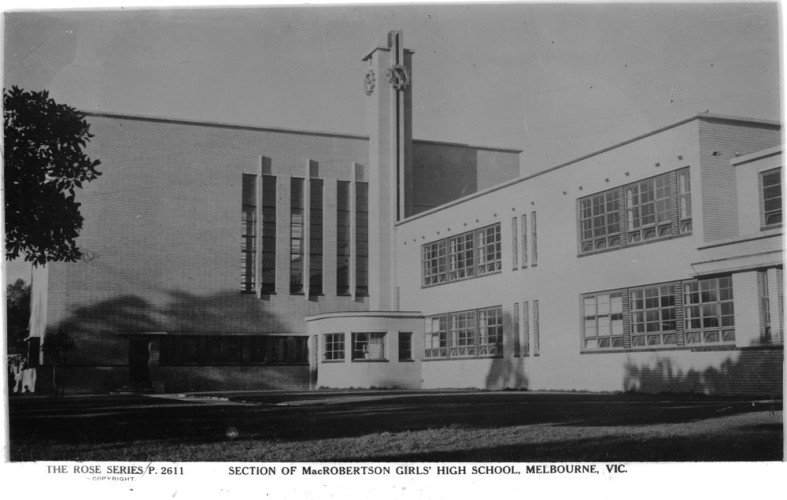 2 History of building
2.1 original brief/purpose: Public Secondary Girls’ School.
2.2 dates: commission/completion: 1933-1934
2.3 Architectural and other designers: Norman Seabrook (1905-1979).
2.4 Alan Fildes (1909-1956) was the building superintendent and later became a partner to Seabrook, establishing the practice of Seabrook and Fildes.
2.5 significant alterations with dates:
1954: a caretaker’s residence was erected on the flat roof of the east wing as well as a prominent mural to the entry foyer and double glazing introduced to the east wall windows.
1961: a new balcony was added to the assembly hall designed by Leith & Bartlett as well as a new access staircase and extra classrooms including a music room. This extension was made sensitively to match the original fabric in both its materiality and language.
1970: A new senior library was built which greatly altered the appearance of the building. This extended from the original rooftop library around the top of the north wing to meet the assembly hall. Again, this extension was made sympathetically, adopting similar detailing and character but the overall composition of the building was adversely affected.
1978: The science laboratories were refitted and repainted, curtains added to the windows of the assembly hall and the original ‘schoolhouse’ light fittings were changed.
2.6 current use: secondary girls’ school
2.7 current condition: Good

4 Evaluation
4.1 Technical: The school incorporated modern building and servicing products, celebrating
technology in line with Modernist ideologies. It boasted the latest materials, fittings and
furnishings including a modern heating device known as the ‘Oil-o-matic’, bakelite fittings and 23
steel tubular chairs. The school also incorporated a sophisticated clock system, designed by Seabrook in conjunction with a local clock maker, which consisted of thirty-six clocks throughout the classrooms and the main hall.
4.2 Social: The building was constructed as a result of a substantial gift made to the government for
its centenary anniversary, by local philanthropist and chocolate manufacturer, Sir Macperson 24
Robertson. It was officially opened by the Duke of Gloucestor on 7 November 1934, as part of the state’s centenary celebrations.
4.3 Cultural & Aesthetic: The building was the first Modernist school to be constructed in Victoria, and possibly Australia. It received enormous public attention and was a radical departure from previous school buildings in its functionalist planning and celebration of form where contemporary
schools tended to adopt a variety of styles from Gothic collegiate to Georgian revival. Its cream 25 brick, also, had been rarely used to this extent in a public building in Victoria and had previously
been limited to smaller applications such as in polychromatic brickwork. The school also pioneered open-air schooling in Australia, in tune with progressive theories on education that had
been emerging trans-nationally.
4.4 Historical
4.5 general assessment : The building is an important example of Australian Modernist architecture.