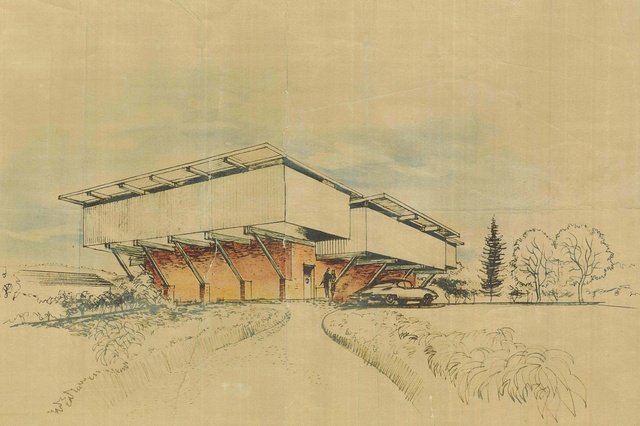 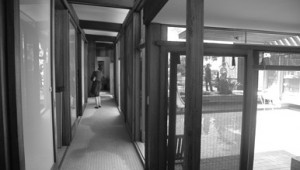 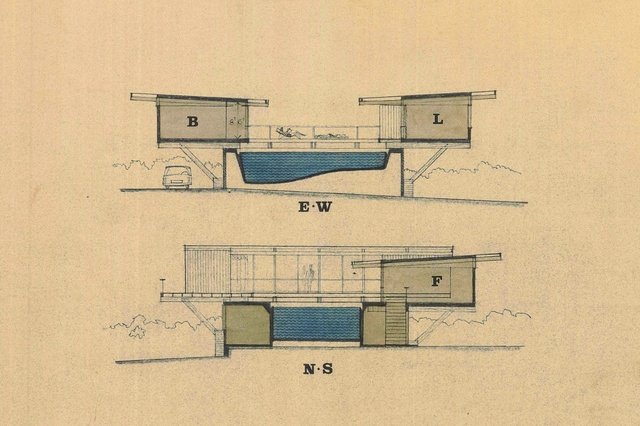 1.2 Status of protection
protected by: state/province/town/record only
name(s) of surrounding area/building(s): The house is located on Port Hacking Road at the southeast end of the Dolan’s Bay/Port Hacking peninsula.
visual relations It is a suburban setting with views over the Port Hacking River itself. From the road, a curved driveway leads the visitor around native garden vegetation to arrive at the base of the house in the undercover parking area.
functional relations
other relations:
1.3 Visually or functionally related building(s)/site(s)

commission brief:
design brief: Robin Boyd and the client worked on the design for the Lyons House in a collaborative manner. They were able to produce a building that took advantage of the site, in terms of setting and extensive river views, as well as incorporated a swimming pool as the focus of the house and allowed for adequate parking space. The design was also developed to allow for a substantial area of native landscaping.The client selected Robin Boyd as the architect for the project as a result of a familiarity with the architects’ early writings and a high regard for his typically intellectually rigorous response to a brief. The client wished to secure a design that was honest in its expression of structural requirements and materials and thus felt a close affinity with Boyd’s design philosophy.
building/construction: As Robin Boyd worked as a Melbourne based firm, the architect Bill Smith of McConnell Smith and Johnson was engaged to administer the building contract on a day to day level. During the construction period, Robin Boyd visited the site on route via Sydney to Canada where he was designing the Montreal Expo building.
completed situation:
original situation or character of site:
Relevant persons/organisations

2.3 Other persons or events associated with the building(s)/site

type of change: alteration/renovation/restoration/extension/other: The Lyons House remains almost entirely unchanged from its original design. The exterior and interior fabric have been well maintained and are in excellent condition. The garden setting has likewise not been modified.
date(s):
circumstances/ reasons for change
effects of changes:
persons/organisations involved:

The Lyons House is located on Port Hacking Road, leading out to the Dolan’s Bay peninsula. It is built on an irregularly shaped site, with extensive views over the Port Hacking River.The design of the house was generated in response to the client’s desire to have a swimming pool as a main focus of activity combined with the need for substantial undercover parking. As a result of the discovery that the site was of solid sandstone, the concept of raising the swimming pool above ground level, in order to minimise costly excavation, was suggested. From this, the two-storey form with an elevated volume wrapped around a central swimming pool sited to accommodate the views was developed.

At ground level, the house is constructed of clinker face brickwork. The plan has perimeter rooms surrounding the foundation area of the concrete swimming pool. Undercover parking is possible on four sides, although a barbecue and play area set within native vegetation is located to the north. The entry hall, on the southern driveway side of the house, contains the stair that leads to the family room at the main upper level. From the hall, internal access is provided to the laundry and storage areas, with the plantroom accessed externally. The hall has a porthole window through which the swimming pool may be glimpsed.

At the upper level, the house is timber framed and paneled (predominantly in Oregon), and cantilevered out over the level below. The structural system is fully exposed, and consists of a combination of paired timber beams and strutted brackets at regular spacings around the perimeter supported on attached brick piers. The upper level has a flat roof, clad in Brownbuilt metal sheeting, with exposed timber paneled eaves. Highlight glazing runs around the perimeter of the structure. The internal layout is U-shaped in plan, surrounding the swimming pool on three sides and opening to a deck area to the north. The plan is split-level, with the two side wings several steps up from the main family room. The house has extensive neighbourhood and views from almost all of the rooms. While the house focuses internally on the central pool, it focuses externally on the middle distance views of the river.

The western wing contains four bedrooms, the master with a small ensuite and walk-in wardrobe, and a separate bathroom. A study is located in the south west corner. The eastern wing contains the eating areas, including separate spaces for the kitchen and casual eating area, pantry, semi-formal dining and living area. A music room is located at the southeast corner, able to be opened out into the adjacent living and family areas thereby increasing the volume of the spaces. The interior character of the house is somewhat Japanese in influence, with the use of sliding screen walls to promote flexibility. Marion Hall Best, a well-known Sydney interior designer, contributed to the selection of interior elements including furniture and fittings.

Externally, the house is strong in architectural character with a clear and rational design concept. With its solid masonry base and cantilevered timber framed box above, with the swimming pool as focus and the view beyond, the house is a clear expression of its planning approach. The garden design was prepared by Bruce McKenzie, known in Sydney for his successful creation of sympathetic native settings for Sydney houses.

of whole building/site: Residence
of principal components (if applicable): Residence
comments: The residence is still occupied by the original owner
3.3 Present (physical) condition

of whole building/site: The owner of the Lyons House, Dr Lyons, has carefully maintained the building fabric (both internal and external) as well as the sympathetic landscape setting and river outlook. The planning remains intact with most of the original finishes in excellent condition. The house has been inhabited continuously by the original owner for the last 34 years ensuring the integrity of the house be retained.In general, the Lyons House is in excellent physical condition.
of principal components (if applicable): n/a
of other elements (if applicable):
of surrounding area (if applicable): n/a
comments: n/a

No conservation threats have been identified

4.1 technical evaluation:
The Lyons House responds to difficult site conditions through innovative planning with the elevating of the building and the incorporation of an internally contained swimming pool and associated services.
4.2 social evaluation:
The Lyons House was designed by Robin Boyd, a leading architect, architectural critic and social commentator of the mid-Twentieth Century in Australia. He was an award winning architect, recognised by Australian and American architectural institutes with life fellowship. The Lyons House appears to be the only example of the renowned Melbourne architect Robin Boyd’s housing in Sydney.
4.3. cultural and aesthetic evaluation
The Lyons House has been identified as the only significant work of the important mid 20thCentury architect and critic, Robin Boyd to exist in Sydney. It demonstrates the rational approach to design and building structure that was a hallmark of Boyd’s residential work. The architectural style of the house is considered as Post-War Melbourne Regional, a ‘rational structuralist’ design approach. Robin Boyd was well known for his work in this style, designing many houses in Melbourne from the 1940s through the 1960s.The Lyons House has a distinctive architectural and external form with a clearly expressed architectural concept. It exhibits a high standard of design and construction detailing, both internally and externally. It is a landmark design for its response to site constraints. The Lyon’s House is representative of structurally rationalist approach to architectural design.
Comparative significance
4.4 canonical status (local, national, international)
The Lyons House has been documented and critically acclaimed in several books and journals as an example of Robin Boyd’s strong design philosophy and response to site conditions. It is also of significance for the landscaping, using native species, by Bruce McKenzie and the interiors by Marion Hall Best.Robin Boyd was awarded the Royal Australian Institute of Architects Gold Medal in 1969 for outstanding contribution to architecture – two years after the Lyons House was constructed. He was both a Life Fellow of the Royal Australian Institute of Architects and an Honorary Fellow of the American Institute of Architects. He was additionally granted an Honorary Doctorate of Letters by the University of New England in 1967. Robin Boyd was an outstanding Melbourne/Australian architect of the Twentieth Century who has had substantial influence on architectural thought and design.
4.5 historic and reference values:
The Lyons House is an excellent example of the structurally rationalist approach to Twentieth Century housing design in Australia. The planning of the Lyons House, comprising a series of rooms surrounding a swimming pool elevated above the ground exhibits uncommon aesthetics. The house was designed by Robin Boyd, a leading architect and social commentator/critic of the mid-Twentieth Century in Australia recognised for his innovative and intellectually rigorous approach to domestic architecture.
5. Documentation

444 Sydney Buildings published by the NSW Chapter of the RAIA