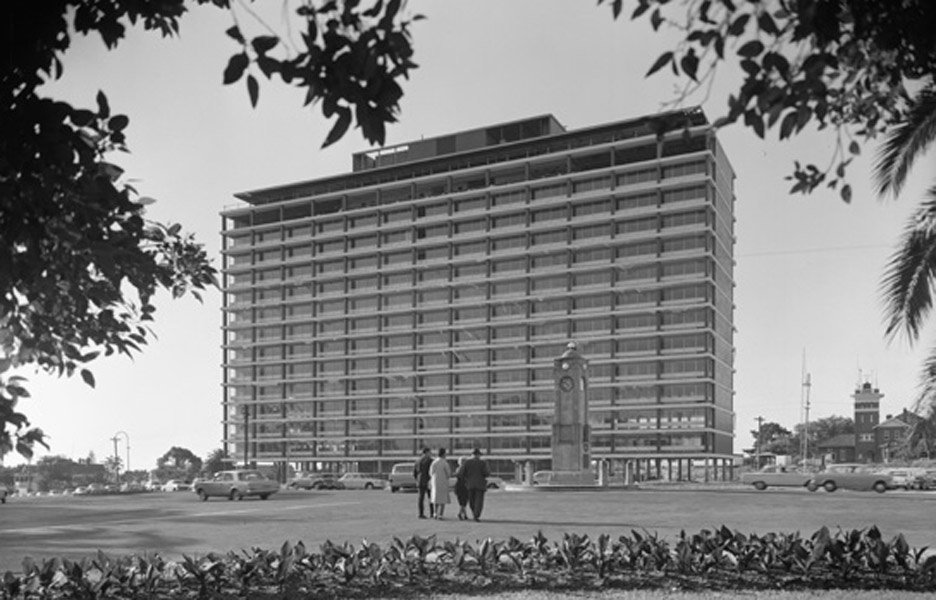 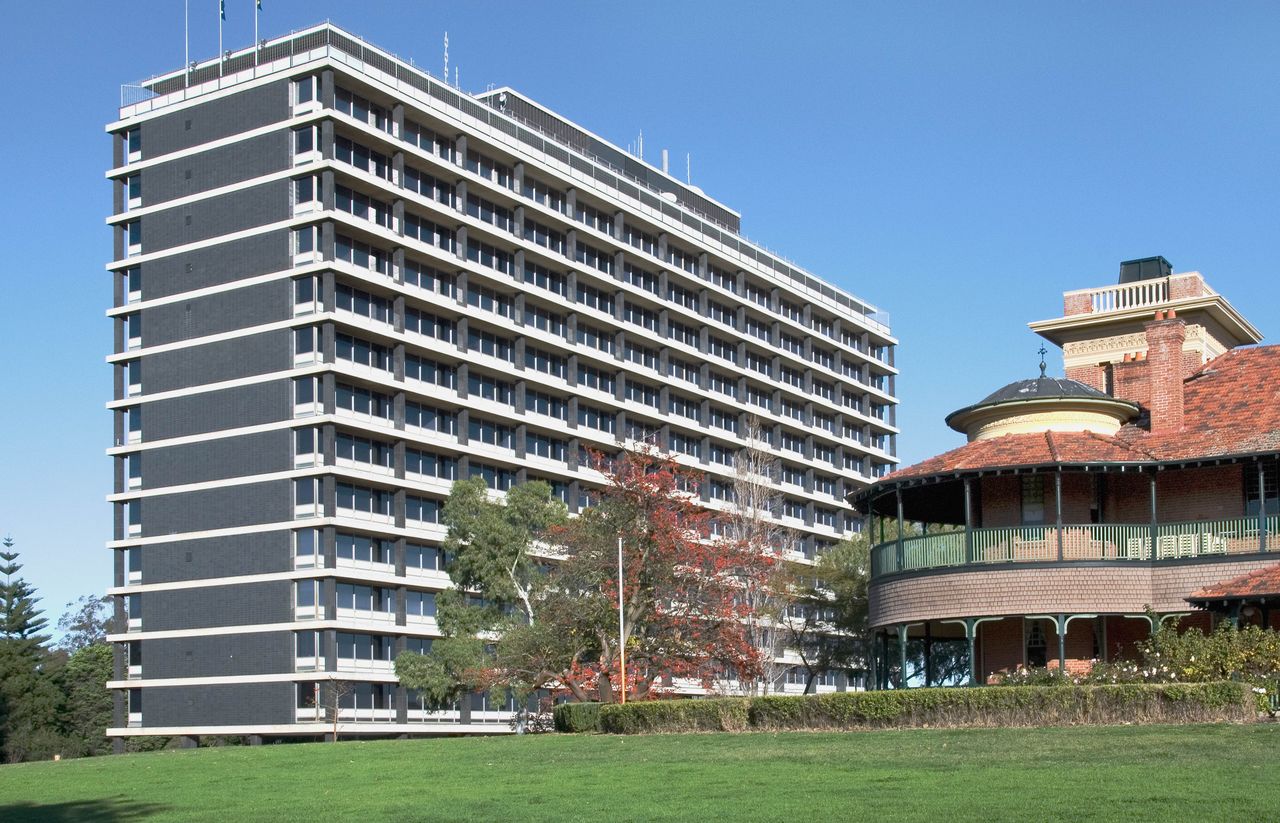 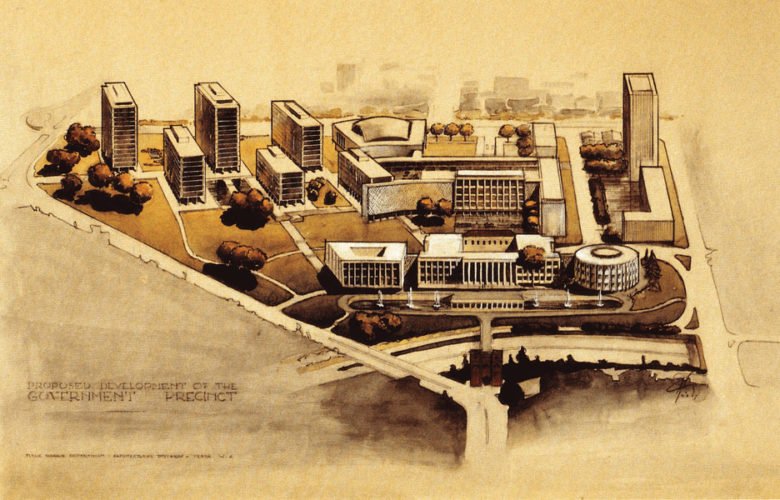 Original masterplan for the area

2.1 original brief/purpose: This single tower is the only built part of a major master-plan to centralize government administration departments into a parliament house precinct in Perth, Western Australia. The four other towers in the master-plan were not built.

2.5 significant alterations with dates: Master-plan scheme 1960-61 was designed with 5 tower buildings in a group. Dumas House (1965) was the first and only tower to be completed according to this plan. The master-plan was officially scrapped by 1968. The Observatory deck located on the top of the building was vacated and closed in 1985. There has been a moderate level of alterations during the last 20 years. There are new plans for developing the site with the addition of another government building adjacent to Dumas House.

2.6 current use: The building is still used as government offices in the manner it was built for, despite significant changes as to which government departments have occupied the building.

3.1 general description: Dumas House is representative of the post-WWII international modernist aesthetic adapted to Australian public buildings and urban contexts. It is now a relatively rare and valuable example of multi-storey, steel-frame and glazed panel building of the early 1960s. The single tower was part of a government administration precinct planned for a prominent site above the city of Perth, Western Australia adjacent to Parliament House. The plan, and the one tower that was built, shows a great faith in progressive public government and modernist architecture in Australia of the 1950s and ‘60s.

3.3 context: Dumas House is located on a very prominent site just west of the city centre of Perth on the Mount Eliza scarp overlooking the city centre, and adjacent to the Parliament House of Western Australia and Old Observatory site – both late 19th century buildings. This precinct of important buildings, next to a major public park, Kings Park, forms one of Perth’s most significant settings. The building itself is significantly taller than others surrounding it, and combined with its elevated position makes it a considerable local urban landmark and defines a bookend to the city skyline.

4.1 technical: The building demonstrates a development in building technology in the use of passive sun control devices to reduce thermal loads on the large expanses of paneled glazing. It is therefore exemplary of the adaptation of modern commercial, steel-frame architecture to the demands of the Australian (and in particular Western Australian) level of sunshine and heat load. The design of projecting horizontal slabs illustrates a development in designing environmental controls such as those developed at the near-by Council House building (1963) in Perth that used a T-shaped sun-shade element on the facade. The building was a relative front-runner in providing air conditioning.

4.2 social: The building was re-named in the 1970s after Sir Russell Dumas, who was a prominent director of works and buildings in the state from 1941 to 1953. Dumas House has been associated with the State Government administration since 1966, providing accommodation for departments and ministers. It was in its day a leader in providing improved facilities for government workers: the winning design was reported as creating a “ positive, progressive approach”, and the program was praised for including a dedicated worker’s canteen, female

4.2 social: The building was re-named in the 1970s after Sir Russell Dumas, who was a prominent director of works and buildings in the state from 1941 to 1953. Dumas House has been associated with the State Government administration since 1966, providing accommodation for departments and ministers. It was in its day a leader in providing improved facilities for government workers: the winning design was reported as creating a “ positive, progressive approach”, and the program was praised for including a dedicated worker’s canteen, female rest rooms and recreation facilities. Dumas House contributes to the Perth community’s “sense of place”, including the viewing platform that has composed a key vista of the city. 4.3 cultural & aesthetic: Dumas House is a good example of the post-WWII international style – highly influenced by

4.3 cultural & aesthetic: Dumas House is a good example of the post-WWII international style – highly influenced by North American commercial architecture of the period and exemplary of well regarded Australian modernism of the 1960s. The design was the result of a nation-wide competition for both the master-plan and component building design. This competition was won by a local Western Australian team of architects from the Public Works Department, and this is in itself testament to the quality of government public architecture offices in the period of the 1960s and before. The design is representative of international modernism of the period, with a good sense of transparency and lightness to the skin of the substantial frame. The open piazza raises the bulk of the building above the ground, which further enhances a sense of lightness.

4.4 historical: Dumas House was built during a period of growth and prosperity when the state of Western Australia was experiencing a major mineral boom and ensuing building development in urban and regional contexts. During the 1960s this development boom gave rise to many new modern buildings in the city and also precipitated the loss of many 19th century ones. By the end of the 1960s wholesale development gave pause for thought and slowly gave rise to the conservation and heritage movement. Dumas House is certainly symbolic of a faith in growth and modern government.

4.5 general assessment: Dumas House is a landmark post-war modern building in Australia that displays climatic inflection of the international commercial styles, and is symbolic of the considerable power and role of government administration at a state level in terms of Australian politics and governance. Dumas House is a rare and relatively intact Australian example of a steel-framed building of this style that has not been demolished or radically altered.