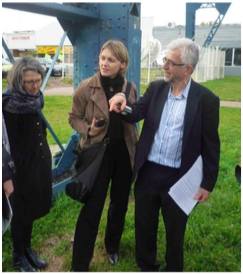 Stephen Hughes is Secretary-general of the International Committee for the Conservation of the Industrial Heritage (TICCIH – 2012 to present) and has been Vice-President of ICOMOS-UK since 2011. In 1996 he wrote the first of the ICOMOS/TICCIH World Heritage Studies (on canals) which has facilitated the inscription of a series of World Heritage studies internationally including one he subsequently wrote on Colliery Monuments (2003). He has written, edited or co-authored several books including the World Heritage nomination document for Pontcysyllte Aqueduct and Canal (2008); a book on a designer of Italianate Workers’ Chapels in mining settlements – Thomas Thomas (2006). The Archaeology of the Welsh Uplands (2003); Copperopolis: Landscapes at the international centre of Copper-smelting in Swansea (2000); books on the Engineering and Architecture of Collieries (1996) and of Lighthouses in Wales (1994); The Archaeology of an Early Railways (1990) and A Guide and Study in Waterways Archaeology (1988). He has organised international partnerships on mining regeneration and the production of interpretative animations (cartoons) of the industrial heritage. Stephen was Projects Director for the Royal Commission on the Ancient & Historical Monuments of Wales, U.K., until 2015.

TICCIH (The International Committee on the Conservation of the Industrial Heritage) has been informally advising the ICOMOS World Heritage Centre on the Industrial Heritage since 2000. In 1996 TICCIH & ICOMOS jointly published the first of 20 Thematic Studies for the World Heritage Convention on Canals, which can all be found on the ICOMOS website. In November 2011 ‘The Dublin Principles’: Joint ICOMOS-TICCIH Principles for the Conservation of Industrial Heritage Sites, Structures, Areas and Landscapes were adopted by the ICOMOS General Assembly in Paris. A new MOU between TICCIH & ICOMOS was signed in Florence in 2014, and action is underway.