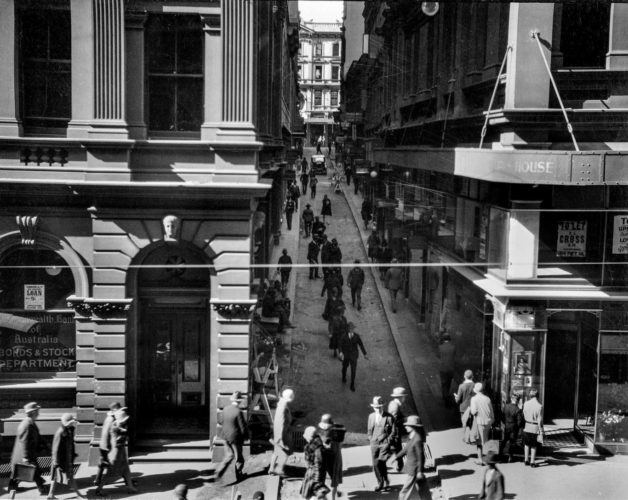 Sydney Museum Events part of the Exhibition “Demolished Sydney”
SUNDAY 5 MARCH 2017 3PM–4.30PM
Rowe Street, a narrow lane between Castlereagh and Pitt streets, epitomised Sydney’s bohemian life from the late 19th century until the 1970s, when it was demolished to make way for the MLC Centre. Home to bookstores, tearooms, cafes, bars and European-style fashion stores, with the grand Hotel Australia at one end, Rowe Street was an important centre for Sydney’s cultural life, and introduced the latest local and international trends to the city.

‘For almost a century, Rowe Street was Sydney’s little slice of Bohemia – quaint, arty and as near as we could manage to Montmartre. A rendezvous when coffee bars were new, Rowe Street was a place of poets, painters, shoebox theatres and shops selling Paris hats.’ (Valerie Lawson, Sydney Morning Herald, 13–14 October 2001)

Join us as we discuss the history of Rowe Street and the Hotel Australia, their characters and quirks, and explore the social change that led to the demolition of this cherished enclave.