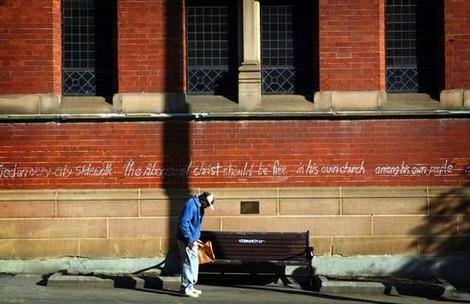 St Vincent’s Roman Catholic Church Group, including the Church, the old presbytery (now Jarjum School), and the old Patrician Bros school then Mercy convent (now the principal site for the Aboriginal Medical Service), is listed on the Local Environmental Plan, number 11348, and was last updated on 14 December 2012. It’s architectural history (Sheerin and Hennessy, 1886, plus 1930s additions) remains modest. It’s cultural history, however, is disproportionately significant to its architectural status, thanks to the fundamental transformations that took place in and around the building from the early 1970s when Ted Kennedy and 2 other priests arrived. Before long, Aboriginal people found themselves welcomed by the new priests, who in turn worked with people like Bob and Sol Bellear, Shirley Smith and Naomi Mayers to encourage the Whitlam government to realise landrights and self determination via real projects. Supporting black leaders to establish The Block, the AMS, ALS, Black Theatre was complemented by the daily commitment to offering hospitality, friendship and practical support to those in need. When times were tough the church served as home, labour ward and mortuary. Yet its bare floorboards and peeling walls provided a setting for much creativity some of which took the form of temporary and permanent art works. All the artists, whether well known or not, had a connection of some sort with the community and valued its palpable commitment to social justice, inclusiveness across gender, age and faith, and creativity in and around the ceremonies. Everyone was made welcome, and the place was packed.

Evidence of this history is now under threat. Over the last ten years a succession of deeply conformist priests appointed by archbishop Pell have shown little interest in the church’s history and blocked many activities. Recent maintenance works have seen the heritage fabric compromised, with Australian cedar and kauri pine fittings painted over, chandeliers and strip lighting installed, and a kitchen erected at the back of the church. Now, many of the unique art works installed during the 1970s, such as the Tom Bass altar, mural, trachyte font and tabernacle, are at risk of being removed and replaced.

Catherine will elaborate on this architectural, cultural and interior history and will ask what can be done to forestall the destruction of material evidence of that history, especially as its significance, she believes, reaches beyond the Catholic Church and remains something of a beacon across the nation. Does the church have wider significance than just at a local level?

SPEAKER: Dr Catherine De Lorenzo is an art historian, formerly in Architecture, Built Environment UNSW, now Adjunct A/Professor at COFA, UNSW and Monash. In 2005 she won the Marion Mahony Griffin Prize for her cross-disciplinary strengths. She is a CI on an ARC Linkage project co-examining curated art exhibitions and art history, and is on several editorial boards. She has been associated with the parish since the early 1970s. 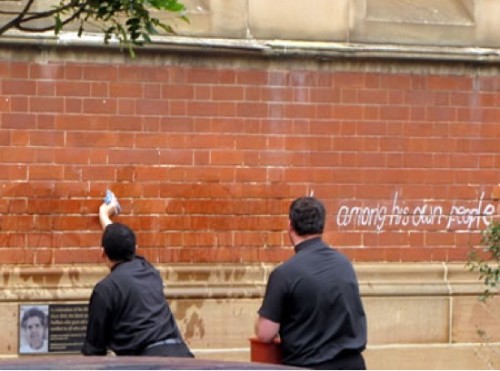