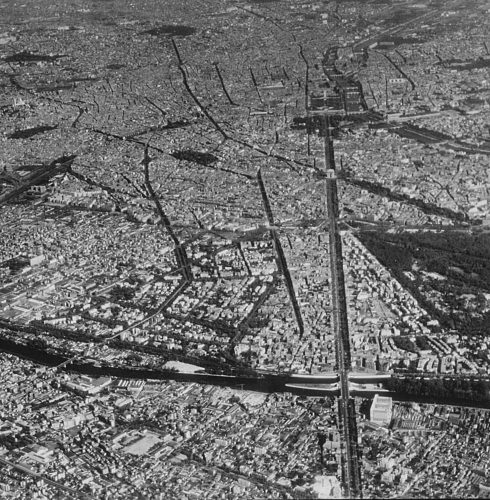 Eminent international architect and architectural historian Jean Louis Cohen joins us to discuss innovative new metropolitan strategies for the Paris region, including the ‘reinvention’ of several key sites across the city. Faced with the prospect of simply becoming a vast open air museum, these projects aim to shape a new creative scene in the French capital, and will be discussed in their  many dimensions – from the spectacular gestures to the contextual designs.

The articulation of the city of Paris and its surrounding region has been a difficult issue ever since the middle of the 19th century. Class contrapositions and political conflicts have long prevented the development of comprehensive metropolitan strategies.

A significant turning point has been the closed competition launched in 2007 by the then president Nicolas Sarkozy with the goal of defining powerful projects around the central city. Astutely misunderstanding his requests, dozens of architects, from Yves Lion to Jean Nouvel, Richard Rogers and Bernardo Secchi, landscape designers and social scientists proposed in 2009, a series of innovative strategies, which are now slowly being implemented in several fragments of the region. On its own, the central municipality has also engaged in 2015 a program for the ‘reinvention’ of several key sites, while many new transit hubs emerge in the suburbs.

Against the threat faced by the French capital of becoming a vast open-air museum, the projects shaped in response to these policies shape a new creative scene, which will to be discussed in its many dimensions, from the spectacular gestures to the contextual designs.

SPEAKER
Trained as an architect and historian, Jean-Louis Cohen is the Sheldon H. Solow Chair for the History of Architecture at New York University’s Institute of Fine Arts, and a guest professor at the Collège de France. Specializing in modern architecture and city planning, his research has focused on the French, German and Soviet architectural avant-gardes, on colonial situations and on Paris planning history. He has published more than thirty books and curated numerous exhibitions at major institutions globally. In 2014 he received the special mention of the jury for his French pavilion at the Venice Biennale.

MORE INFORMATION
Jean-Louis Cohen’s visit is supported by Sydney’s three university architecture schools – Sydney School of Architecture, Design and Planning, University of Sydney; Faculty of Design, Architecture and Building at UTS; and the Urban Typologies Research Cluster within the Faculty of Built Environment at UNSW Australia – and the Society of Architectural Historians Australia and New Zealand (SAHANZ).