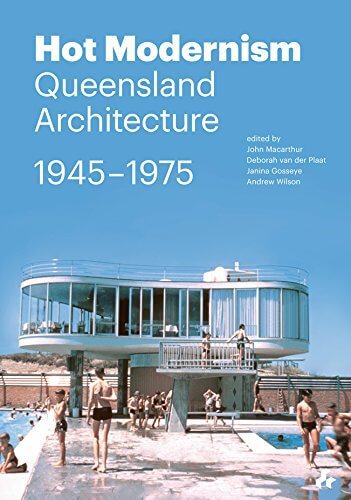 Hot Modernism: Queensland Architecture, 1945-1975 was launched on 9 March 2016 as part of the Asia Pacific Architecture Forum at the State Library of Queensland.

The book is a thematic history that traces both the conflicts and the felicities that occurred as Modernism encountered a region with an already strongly developed cultural identity. Hot Modernism is published by Artifice (London) and was authored and edited by John Macarthur, Deborah van der Plaat, Janina Gosseye and Andrew Wilson, staff of ATCH (Architecture Theory Criticism and History Research Centre) and the School of Architecture at The University of Queensland. It also features contributions by Alice Hampson, Elizabeth Musgrave, Silvia Micheli, Robert Riddel and Don Watson.

The book is the final outcome of an Australian Research Council (ARC) Linkage grant which also included the exhibition Hot Modernism Building Modern Queensland 1945-1975 (State Library of Queensland 2014) and the Digital Archive of Queensland Architecture, an interactive online tool that can be accessed by the public at www.qldarch.net. The mixed media site allows users to explore the key people, projects and firms of architecture in Queensland.

Following an introductory talk by Professor Alan Rix, Pro-Vice-Chancellor at UQ, Hot Modernism was officially launched by The Honourable Dr Steven Miles, Minster for Environment and Heritage Protection and Minister for National Parks and the Great Barrier Reef. Dr Miles used the event to launch a ‘special working party’ to explore and investigate innovative programs to conserve places of cultural heritage significance. Taking inspiration from community-initiated programs currently conserving natural heritage, the working party [will] include representatives from the Australian Institute of Architects, the Queensland Heritage Council, the heritage tourism sector and the philanthropic, social enterprise and volunteer sectors. Professor John Macarthur, Director of ATCH, has been invited to be a member of the new committee. Following Minister Miles, Mr Michael Keniger, former Queensland President of the Royal Australian Institute of Architects, continued the proceeding with a summary of the book and his comments and insights.

Over 200 people, including many architects from the post-war period, owners of key buildings, and lovers of mid-century design attended the opening.  Architects Geoffrey Pie, Ian Charlton, Russell Hall and Neville Twidale were in attendance as was NSW Supreme Court Justice Ian Gzell (son of architect Vitaly Gzell) and Joan Jacobi, patron and former owner of Hayes and Scott’s Jacobi House (1957). ATCH and the UQ School of Architecture would like to thank those who attended and those who supported the project in its three forms over the years. We would like to especially thank the project partners, the State Library of Queensland, Conrad and Garget Architecture, Wilson Architects, Bligh Voller Nield and the former Riddel Architecture.

Hot Modernism is available for purchase via the  Amazon Web  Site