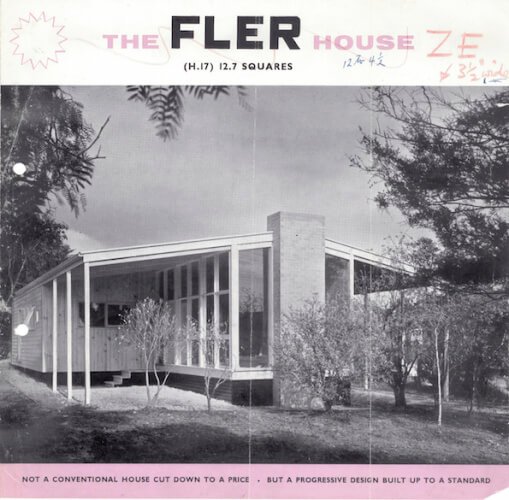 This open day is a survey of Boyd’s house designs for the urban growth areas of the 40s, 50s and 60s. It includes little known project homes and modest bespoke houses in Melbourne’s Eastern suburbs extending from Blackburn to Monbulk.

For many years the edges of Melbourne provided opportunities for the development of new, affordable housing and helped to define the ‘Australian dream’. Today, architects and other design professionals have little involvement in the design of Growth Area estates and project homes, which are shaped by conservative perceptions of market expectations.

Throughout his career Robin Boyd, a central figure in the architectural profession, was unceasing in his efforts and commitment to designing affordable project homes that challenged market norms by offering alternative approaches to siting, subdivision, construction, house design and even estate planning. These efforts provoked changes to established paradigms and can still challenge practices today.

Immediately after the War, in 1947, as the first Director of the Institute of Architects’ Small Homes Service, Boyd led a revolution that mobilised owner builders on the eastern and southern edges of Melbourne and transformed the growth suburbs of the day such as Blackburn.

Syndal and Mt Waverley emerged as the growth suburbs of the mid 50s at the same time as organised home builders like Contemporary Homes began their domination of the suburban housing market. Boyd designed their first project home range, as well as working for boutique market players such as Fler.

A sense experimentation was developing in the 60s and Boyd was commissioned by Lend Lease to design their Appletree Hill Estate in Glen Waverley, Isador Majid’s visionary Fountain Gate Estate on the fringes at Narre Warren and an Elderly persons Village in Monbulk.

This is the first time a representative group of Boyd’s project homes have been open for viewing at the same time. This open day provides a revealing opportunity to observe how project homes have evolved in response to community aspirations, and reflect on today’s needs and the quality of houses being offered in the current market.

Small Homes Service:  Design T211    1947
Published: The Age 8th October 1947
BlackburnOne of the first houses reviewed and published by Boyd when he commenced as Director of the The Age Small Homes Service. This house epitomises the spirit of the post war era and the success of the Small Homes Service. Owner built over a number of years, and until recently still owned by the original family, the open day house is unaltered and in totally original condition.

Contemporary Homes Pty Ltd: Peninsula House    1956
BlackburnDesigned by Robin Boyd the Peninsula was a modular house able to be assembled in a range of configurations, factory built, and then transported and erected on the purchaser’s land. The example included in this open day is remarkably intact and skillfully enhanced with additions designed by Gregory Burgess in 1972, early in his career during his first year in private practice.

Initiated by Fred Lowen and Ernest Rodeck, the Directors of the Fler furniture manufacturing company, as a secondary product to safeguard their company in the event of a downturn in the furniture market, the Fler House was designed by Robin Boyd. This factory manufactured house could be erected as a 2 bedroom home or expanded to 3 bedrooms. The first display home was openned to great acclaim by the Premier Henry Bolte and sales of timber and brick veneer versions began the Fler Housing Scheme.

After the successful completion of the Domain Park apartment building in South Yarra, Lend Lease invited Robin Boyd to design their Appletree Hill project. Inspired by Six Moon Hill in Boston USA, which was designed by Walter Gropius, Appletree Hill was the first Australian attempt to develop a sizeable community (approx 400 houses were proposed), in a single area to the design of a single architect. Boyd was commissioned to design a ‘suburb in minature’, together with all the houses. Six display homes were completed, furnished and offered to the public. Two of these homes – RB 001 ‘Garden Court House’ and the RB 004 ‘Courtyard House’ – are included in this open day viewing.

Developer, businessman and philanthropist Isador Majid had an ambition to provide civic facilities and homes that were affordable for most people. The Fountain Gate estate was designed by Robin Boyd in collaboration with Majid using Radburn principles which separated road traffic and pedestrian circulation providing access to parks, schools and shops through communially owned extensive parklands. Robin Boyd, Daryl Jackson, Reg Grouse and William Collison Kerr designed a series of houses which were offered as house and land packages to purchasers.

Recognising the need to provide affordable accommodation for elderly people within their community a group of local residents established a committee to develop and later manage this community owned facility. Robin Boyd was commissioned to masterplan the chosen site, providing for 32 units and a Community Centre. As funds were sourced 18 units were progressively completed to Boyd’s original designs, in five stages, by 1973. The complex was finally completed by another architect after Boyd’s death.

Designed by Roy Grounds and Robin Boyd, the Pearce House is like a suburban farm house. Sited on a very large allotment on the outer fringe of Melbourne’s suburbs in the mid 50s, it is a commanding house with distant views out to the Dandenongs, Healesville, and Westernport Bay. Wrapped around three sides of a central courtyard, once inside the house has the intimacy of a suburban dwelling.
This house is included in the open day courtesy of Vic Roads.

Designed by Robin Boyd for one of his former students, the Simon House was to be a modern, country cottage. This house originally located in picturesque rolling farmlands is now been surrounded by suburban development. On an early visit as the house was being completed Boyd remarked that it reminded him of a Greek village.

These are all self guided tours. Details of the addresses of all properties will be provided with your ticket.

Tickets must be pre-purchased. Book early as this event is expected to sell out – ticket numbers are limited.

Tickets containing the address details of all properties will be issued by email on the Wednesday prior to the open day. Tickets will be emailed to the email address you use when registering to purchase your tickets.

Entry to all properties will involve significant numbers of steps.

Payment can be made with VISA and MASTERCARD. Unfortunately other types of credit cards cannot be accepted.

Upon completing your transaction and purchase you will be issued with a tax receipt.

Once bookings are completed cancellations and refunds are not possible.