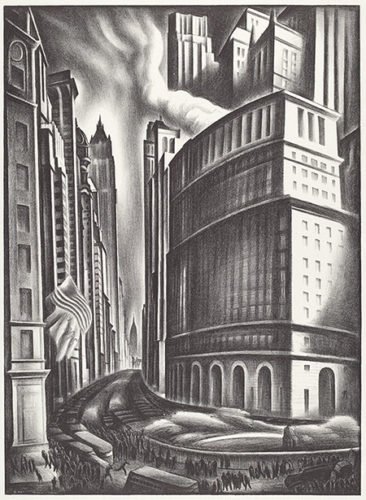 “During the past decade the Gallery has acquired extraordinary groups of prints from the Reba and Dave Williams Collection, the Corcoran Collection, and the collection of Bob Stana and Tom Judy,” said Earl A. Powell III, director, National Gallery of Art. “We are thankful for the generosity of these donors and for the opportunities that have allowed the Gallery’s American print holdings to grow in both richness and depth.”

The exhibition is organized by the National Gallery of Art, Washington.

The black-and-white prints that comprise The Urban Scene, most of which were acquired in the last ten years, often highlight the unprecedented scale of urban architecture and the impact of industry and technology on city life. From one perspective, skyscrapers, bridges, and other technological marvels projected wealth, opportunity, and invoked the sublime, but from another these structures could be interpreted as blocking light, deepening shadows, heightening a sense of enclosure and confinement, and amplifying feelings of diminution and anonymity.

The artists featured in this exhibition chose their subjects, arranged their compositions, and scrutinized details to convey particular aspects of urban life. They used line to capture the specifics of a face or the idiosyncrasies of a building and manipulated tone to mimic the play of light. Employing precise detail and descriptive clarity to characterize experience, suggest meaning, and convey a narrative, certain elements were emphasized while others were minimized, resulting in images distilled to their narrative or atmospheric essence.

The exhibition is organized by Charles Ritchie, associate curator, department of American and modern prints and drawings, National Gallery of Art.