Icomos/Docomomo Talk: Explorations in Cultural Landscapes through the lens of Macquarie University 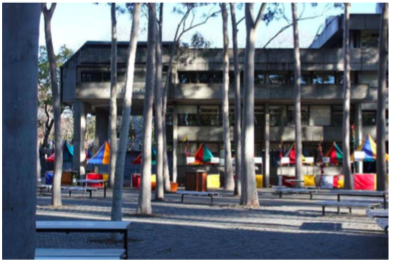 Explorations in Cultural Landscapes through the lens of Macquarie University

The notion of cultural landscape is well recognised for its ability to enable discussion about non- physical, intangible values. Planning principles are intangibles critical to the architecture of the mid- 20th century period.

Macquarie University is highly regarded for its brutalist buildings and modern landscape. However, its most significant architectural attribute is arguably the master planning of the site. Planning of Macquarie University was not based on the traditionally understood model of public space but rather the innovative concept of shared space, reflecting the radically different pedagogical approach of the newly established university.

This talk by Hector Abrahams explores the relationship between what was built and the values of the university. It will include a virtual tour of the buildings and a short interview with Bob Meyer, who was the assistant to the university planner, Walter Abraham, between 1966-1969. Dr Cameron Logan (Director of Heritage at The University of Sydney) will speak briefly on a current ARC research project on the post-war university campuses in Australia.

Talk RSVP: by Monday 18 September 2017 via email to Jane Vernon jvernon@tpg.com.au Bookings are essential as places are limited.

Hector has worked as an architect specialising in conservation and heritage since he graduated from the University of Sydney in the mid-1980s. He has always had an interest in cultural landscape, although it didn’t have a name when he was an undergraduate. He is the chair of the AIA NSW Chapter Heritage Committee.