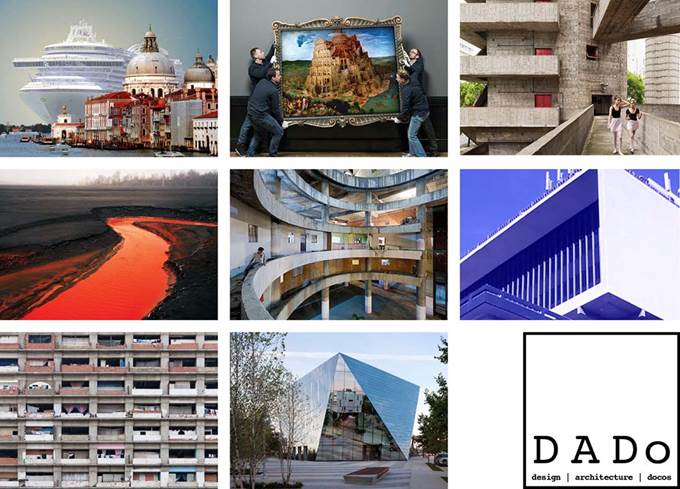 The 2015 programme is out and subscriptions are open for a new season of magnificent Design + Architecture DOcos. Visit us at www.robinboyd.org.au/dado for the full list of films and brilliant guest speakers visiting Walsh St this season.

Opening night guest speaker: Doug Hall, former director of the Queensland Art Gallery and Commissioner for Australian exhibitions at the Venice Biennale 2009 and 2011.

Venice is pure romance; that which all Europeans yearn for, the dream of all Americans, the wish of all Japanese.
But the world’s most beautiful city turns into a ghost town at nightfall. Entire quarters, long since abandoned by their inhabitants, stand empty, their structures merely providing a myth to serve business interests.

Twenty million foreigners visited the city last year. That’s an average of 60,000 day. And this year it will be more still. By comparison, there are only 48,000 inhabitants, the same amount as they were after the Great Plague of 1438. And next year it will be fewer still. For the city is becoming uninhabitable. Venice’s own urban life has almost collapsed; it scarcely still exists.

The film shows what remains of Venetian life: a subculture of tourist service industries; a port for monstrous cruisers which is waiting to be expanded; Venetians who are moving to the mainland as there are no longer affordable apartments to be found; an aged noblewoman who treats the municipal council with scorn; a realtor who is considering abandoning the sinking ship.

A Requiem for a still grand city. An illustration of how common property becomes the prey of few. An elegy to the last Venetians, their humour and their hearts.

Print courtesy of the Miramonte Film.

Doug Hall,  (AM) lives in Melbourne and is Associate Professor and Honorary Principal Fellow at the Australian Institute of Art History at the University of Melbourne.  From 1987 to 2007 he was director of the Queensland Art Gallery.  Under his directorship the Queensland Art Gallery expanded its international focus and developed a strong engagement with Asia, especially through his initiative, the Asia-Pacific Triennial of Contemporary Art.  He conceived the idea for the $140 million Gallery of Modern Art (GoMA) and oversaw its development through to its opening in December 2006. He was the Commissioner for the Australian exhibitions at the Venice Biennale in 2009 and again for the 54th Venice Biennale in 2011. He has initiated, negotiated and curated many major exhibitions from within Australia and internationally and continues with academic and advisory roles in Australia and overseas. He has served on a range of cultural organizations including Chairman of the Visual Arts Board of the Australia Council,  member of the Australia International Cultural Council (Department of Foreign Affairs); the Asia Art Council, Guggenheim Museum (New York). He is widely published in newspapers, magazines and journals and writes art criticism for the Australian Financial Review.