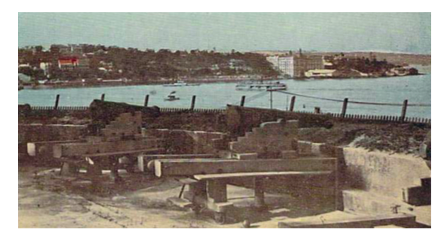 The talk will be preceded by a free tour of the Dawes Point Battery, with Denis Gojak.

Matthew Kelly is an experienced historical archaeologist, from Sydney, Australia, with a wide range of excavation and survey experience both in Australia, the south-west Pacific and Europe. Matthew has worked in both colonial heritage management and archaeology since the 1990s. Matthew’s overseas experience includes research projects in Portugal, Germany, Austria and Luxemborg. More recently his international work has been focussed on the survey of WW2 battlefield and defence sites in PNG on the Kokoda Track and the Sogeri Plateau – outside Post Moresby, and the remote sensing survey of two WW1 battlefields in Northern France. Matthew is also part of a larger team undertaking a survey of colonial and military archaeological sites in East New Britain, under an ARC Linkage Grant with James Cook University, Cairns.

Talk RSVP: by Monday 12 June 2017 via email to Louise Cox thubbul@bigpond.com. Bookings are essential as places are limited.