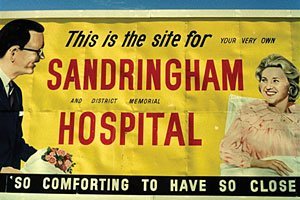 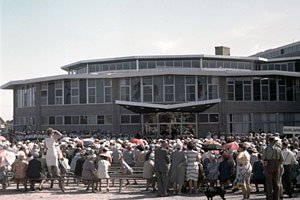 The hospital was originally planned to accommodate 88 beds. It is characterized by its unusual trio of polygonal buildings with axes connecting the central stations of each, forming a triangular arrangement, with each apex articulated as a ring. The largest of the three polygons is three stories. At its centre were the main administrative offices and at the centre of those offices was a cylindrical light court. At the center of the smaller two polygonal buildings were nurses’ stations. Externally the building is clad in dark grey concrete blocks with horizontal raked joints which create a banded effect. The corners have distinctive textured quality derived from the use of alternating brick courses. The two smaller sections have bubble-shaped domed roofs, while the larger polygon has pop-up clerestory roof form. 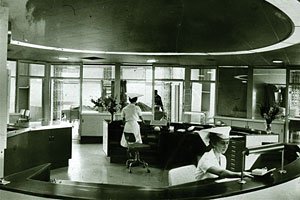