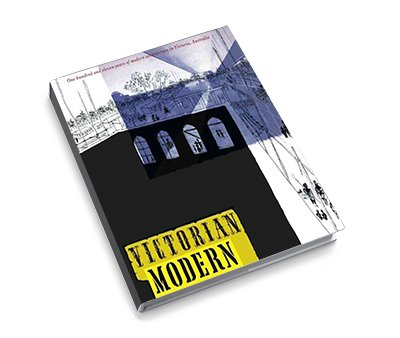 ‘Victorian Modern was not just a landmark piece of Victoria’s architectural history, it was also a visual tour-de-force, revealing Boyd’s skills as a graphic artist and his love affair with typography.’

Professor Philip Goad. Melbourne School of Design, University of Melbourne.
In a manner that characterises the style of Robin’s future writings and lectures, ‘Victorian Modern’ first reviews the history and development of architectural design in Victoria before proposing an approach for the future – in this case ‘The Victorian Type’ a well designed and affordable modern home. ‘Victorian Modern’ was the first book to identify and document the importance of architects such as Harold Desbrowe-Annear, Robert Haddon and Walter Burley Griffin. In their innovative designs that responded to materiality, landscape, place and the Australian lifestyle Robin identified the qualities that he felt should be the basis for development of the next generation of houses to be designed for the 1950s. Design qualities that still resonate and influence us today as the basis for good design.

Read more and buy the book at