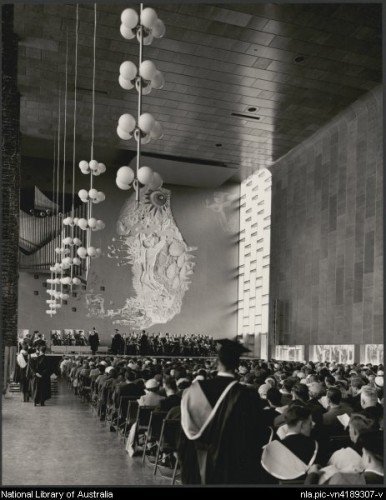 The University of Melbourne, Wilson Hall

Wilson Hall is the ceremonial hall of the University of Melbourne. The current hall arose from the ashes of the original Gothic Revival building of the same name that was devastated by fire in 1952.

Completed in 1956 by Bates, Smart and McCutcheon, the box style building consists of brickwork over a rigid steel framework with a finely veneered interior and four different external elevations, each elaborated with pattern, different fenestration or attached bas-relief sculptures.

The hall is recognised as one of Australia’s most crafted and well-decorated ‘box’ buildings of the 1950s. With its monumental proportions, simple cuboid form, use of curtain wall glazing and lavish materials, it stands as an early and distinctive example of the post-war International Style.

The foyer is notable for its curved ceiling and glass wall enhanced by a stained-glass screen that separates it from the main auditorium. The focal point of the hall’s interior is the massive mural and stained and etched glass screen designed by Douglas Annand, titled The Search for Truth. Also of note is a pipe organ by George Fincham (originally built in 1890 for the Australian church in Flinders Street) and external sculptures by Tom Bass, including the Trial of Socrates above the main entrance.

There are four stone Tudor style heads mounted on the stairwell landing wall. These were part of the decorations on the original gothic revival Wilson Hall that burned down in 1952. Some have speculated that three of them may depict King Henry VIII and two of his wives.