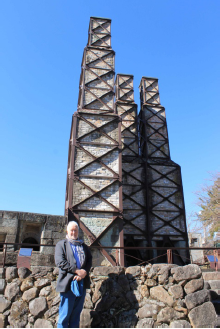 Japan’s heritage is often thought of as wooden temples, stone based castles, cherry blossom and Mount Fuji but there is a reasonable amount of heritage relating to the early period of industrialisation – Japans Industrial Revolution as some call it, which occurred from 1850 to 1912. The modernisation of Japan was a significant event in the late 19th century where a
near colony dominated by Imperial powers rose to modernise, defeat Russia and become a colonial power in its own right all in about 50 years. One might even call it an outstanding event and suggest that surviving sites might indeed have universal and outstanding values worthy of World Heritage listing.

The KY World Heritage project began by the recognition by some Japanese, principally Ms Koko Kato, that some sites may have UOV. This idea garnered support to form a committee with funding available to undertake investigation and inspections. Dr Iain Stuart and Dr Michael Pearson are Australian ICOMITES on the panel of official foreign advisors to the KY committee. We have the role of assisting the representatives of the Japanese Government and other interest groups prepare a Draft Nomination document.

This talk by Dr Iain Stuart, speaking in a personal capacity, outlines the key places under consideration and their historical context, with comments on the process of nomination and how the project has evolved over time.

Dr Iain Stuart is an archaeologist who has worked in Government and in private industry over
the last 30 years. He considered himself “from Melbourne” although he has lived in Sydney
since 1993. He is a Board Member of TICCIH and of the Australasian Society of Historical
Archaeology as well as being a long-term member of ICOMOS.

Cost: Members $7, non-members $12 payable at the door. Wine and nibbles will be
provided.