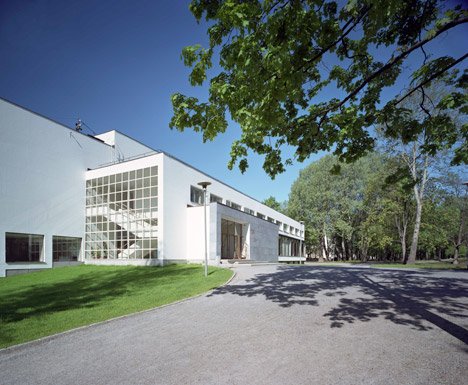 Awarded restoration of the Viipuri Library by Alvar Aalto,

Best restoration of the year 2013 of the Art Newspaper Russia.
World Monuments Fund / Knoll Modernism Price 2014.
Europa Nostra Award 2015 / Conservation.
This library building, a masterpiece of Finnish architect Alvar Aalto (1898-1976), is located in Vyborg, Russia. It was built during the time of Finnish sovereignty (1918 to 1940-44), before the Finnish city of Viipuri was annexed by the former USSR and its Finnish name changed to Vyborg. The library was built from 1933 to 1935 and is one of the major examples of 1930s functionalist architectural design.The major restoration project, which has been carried out mainly by Finnish professionals but with whole-hearted cooperation and main part of financing from their Russian partners, aimed to prevent further deterioration, to renew basic facilities and to restore the original architecture. The library had suffered from serious neglect in the war years, and was largely rebuilt in 1955-1961. There was concern that the library would disappear altogether, but since the 1990s it has been possible, with the help of the original drawings and other working documents conserved in Alvar Aalto Foundation, Finland, to renew stage by stage some of the spaces. In 2010 the Russian government decided to finance the completion of the restoration and in 2013 the fully restored library was inaugurated.The restoration of the library has been awarded with several internationally renowned prizes:More details: website.[Text by Europa Nostra]