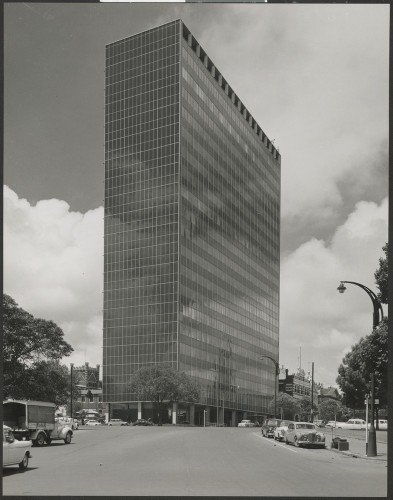 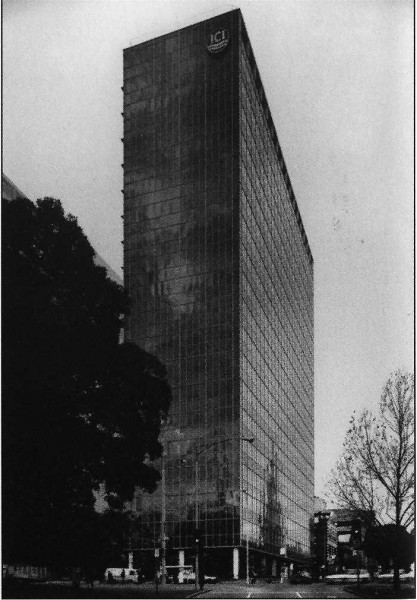 use was one of the first free-standing fully glazed curtain wall skyscrapers in Australia. As one of the nation’s most stylish commercial buildings, it represented the most refined example of Bates, Smart & McCutcheon’s efforts to perfect high-rise office design. Raised on pilotis, the blue-glazed linear stab of open- plan offices, with its clearly differentiated lift core, pierced the city’s 132ft (40m) height limit and changed Melbourne’s skyline forever. It was the provision of the garden at ground level – designed collaboratively by the architects, sculptor Gerald Lewers and landscape architect John Stevens – which enabled the height limit to be exceeded.

2 History of building
2.1 original brief/purpose Office building for ICI
2.2 dates:
commission/completion
1955-58
2.3 architectural designers Bates Smart & McCutcheon
2.4 others associated with building
John Stevens (Landscape Architect) Gerald Lewers (Sculptor)
2.5 significant alterations
with dates
The building’s main entrance is now off Albert Street, through a foyer
that was remodeled in 1989 by the original architects. This was
originally the secondary entrance whereas the main entrance was
originally through the landscaped garden off Nicholson Street. The
building is essentially intact externally but has been refitted
internally. Limited information is available about the integrity of the
garden and landscape generally.
current use Commercial
current condition The building is in good condition

3.0 Description
3.1 general description
The building is described by Philip Goad in his Guide to Melbourne
Architecture, “ICI House was one of the first free-standing fully
glazed curtain wall commercial skyscrapers in Australia. As one of
the nation’s most stylish skyscrapers, it represented the most refined
example of Bates Smart & McCutcheon’s efforts in the 1950s to
perfect high-rise office design. Raised on pilotes, the blue glazed
linear slab of open-plan offices, with its lift core expressed as clearly
separate, broke the city’s 132-foot height limit and changed
Melbourne’s previously consistent skyline forever.” (Goad: 1999:
178)

3.3 context Its height, combined with its position on the eastern hill of the central
business district, terminating the axis of Lonsdale Street, made the
building a landmark. (VHR entry for ICI House)

4.1 technical
ICI House is of architectural significance due to its considerable
advancements in local construction techniques. These include the
framed glazed curtain walls and innovative use of concrete, including
precast reinforced units in structural members and flooring. The
division of the glazed office space from the solidly clad service tower
predates similar developments overseas. (VHR entry for ICI House)

4.2 social
4.3 cultural & aesthetic
ICI House is also of architectural significance as it was a landmark in
the planning of the city of Melbourne. The building was more than
double the previous height restriction enforced in Victoria and the
design was permitted under the uniform building regulations because
the site coverage was examined as a percentage of the total site
area. This led to plot ratio determinations for city sites and the
eventual redefinition of the central Melbourne skyline. (VHR entry for
ICI House)

4.4 Historical
ICI House is of historical significance because from its completion in
November 1958 until 1961, ICI House was the tallest building in
Australia. At 84m it broke the 40.2m Victorian height restriction by
43.6m and set a new precedent in height controls in the city of
Melbourne. (VHR entry for ICI House)

4.5 general assessment
When completed in 1958, the 21-storey ICI Building in Melbourne,
with its height, modern materials and tight skinned, technological
aesthetic, presented the most progressive architectural statement in
Australia. (AHD entry for ICI House)