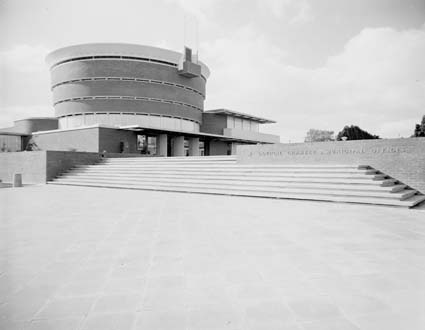 “The Brighton Municipal Offices in Boxshall Street were designed by Kevin Knight of Oakley and Parkes with the engineers John Connell and Associates and were erected by Prentice Builders Pty Ltd., the foundation stone being laid on 13 February 1959. The interior decoration and furniture was by Grant Featherston. The building was opened on 21 July 1961.

The Brighton Municipal Offices are of aesthetic, historic and architectural importance to the State of Victoria.

The circular foyer, Council Chamber, and two circular meeting rooms designed by Grant Featherston including their extant furniture and light fittings, are of aesthetic and historic importance as an intact example of interior design in Victoria of the late 1950’s, and as an important work of Grant Featherston, a leading Australian industrial designer of the 1950’s and 60’s. Grant

Featherston earned for his profession a popular acceptance unique in the history of the Industrial design movement in this country.

The Brighton Municipal Offices are of architectural importance as an expression of the influence in Australia of the work of internationally renowned American architect Frank Lloyd Wright. The building, with its prominent curved and tapering ‘drum’ form recalling his design for the Guggenheim Museum of 1946-59 in Fifth Avenue, New York, successfully combines the different curved and planar forms and integrates the landscaping into the building fabric through use of planter retaining walls. The building represents a successful translation of the Organic International style into a suburban public building in Victoria.”