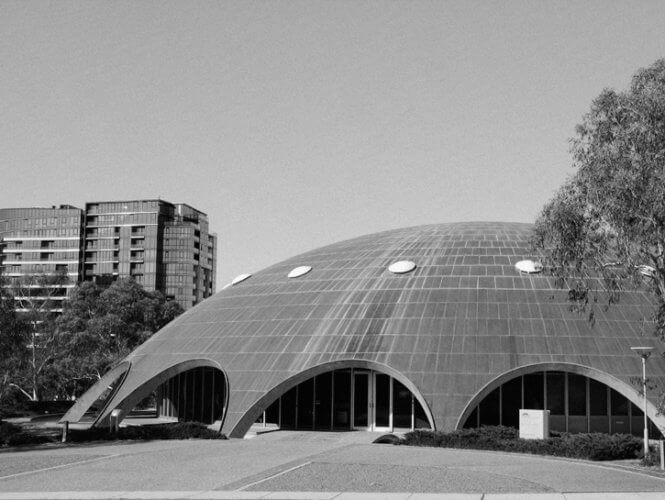 The Academy was Roy Grounds’ first large building. Grounds, with his first partner, Mewton, was recognized at an early age in 1928 when a recent graduate, Grounds eventually joined Frederic Romberg and Robyn Boyd in partnership in 1953. The client, a learned scientific body, required a large conference hall with raked seating and a second larger space, the Fellows Room, as well as council rooms and offices. The Academy of Science was the recipient of the RAIA’S ’59 Sulman Award. Grounds deftly moulded these functions into a simple circular plan with circumferential circulation inside and out and housed it all in a concrete copper-clad dome. The dome functions today as designed and the interior details have been retained. 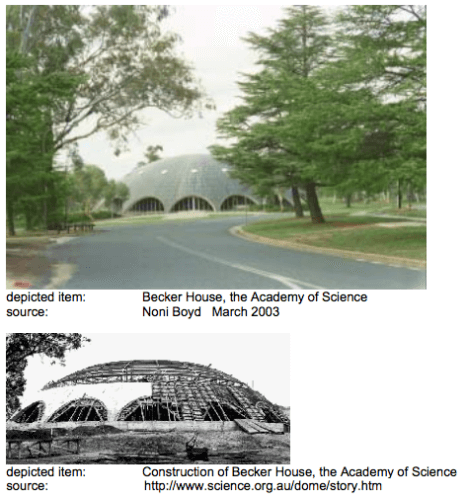 The following description is drawn from the Australian Register of the National Estate listing for Becker House.

The features intrinsic to the significance of this place are the Australian Academy of Science building, Becker House, and the moat surrounding Becker House. Becker House consists of a flattened concrete shell which tapers off to sixteen points, creating a parabolic arch between each load point. This serves to disperse the outward thrust of the dome evenly, whilst creating penetrations in the dome and reducing the heavy aesthetic that a concrete dome creates.

The structural components of the building act as a continuous entity, making the dome extremely stable, preventing movement and the need for expansion joints. The perimeter beneath the dome is enclosed by an aluminium framed curtain wall. The planning of the internal areas is based on a radial grid and is essentially symmetrical. There are two floors with a central void known as the Wark Theatre. The theatre seats 156 people. The building also provides facilities for smaller conferences and meetings in the Council Room and Jaeger Room. The internal walls are mainly brick with simple reinforced concrete slabs creating the second floor. There are concrete beams supporting the second floor slab across the larger open areas.

The design of Becker House paid particular attention to the sound environment, both in terms of acoustic privacy and the clarity of natural sound. The use of carpet, timber panelled walls and vermiculate ceilings, as well as extensive soft furnishings in most areas, provides a quiet atmosphere and limits unwanted sound transmission both within rooms and to adjacent rooms. High quality natural acoustics of the Wark Theatre was designed for speech clarity. The interior walls and the ceilings and integrated lighting provide the means of tuning the room acoustics. The asymmetric arrangement of suspended ceiling discs which act as sound reflectors and provide the main illumination of the space.

The dome is reinforced concrete graduating from a thickness of approximately 60cm at the base supports to approximately 10cm at the peak. The top half of the dome was formed in a single concrete pour. The external cladding of the dome is an overlap, interlocking copper sheeting. The outward thrust of the dome is dispersed by the moat which acts as a ring beam acting hoop tension. The moat’s second function is to diffuse and reflect the harsh Canberra sunlight under the arched overhang and into the building.

Beneath the ground of each of the sixteen load points is a concrete beam on piers taking the footings down to a solid rock foundation. The moat, beam, piers and footings are basically a continuous entity, making the dome extremely stable, preventing movement and the need for expansion joints. The dome is fully self-supporting and expresses the glass curtain wall, simply as a skin enclosing space. The building has been described as being of unconventional, futuristic design.

The construction of the dome was preceded by the building of a one-fortieth scale model constructed from fibre-glass cloth impregnated with a polyester resin. Strain measurements were taken from the model to predict the initial deflection of the concrete shell. The testing proved effective when the actual dome was constructed as it only deflected 3/8 inch in the centre.

At 45.75 metres in diameter, the Academy’s dome is larger than any other dome built before the twentieth century. Its diameter exceeds that of the largest known pre-twentieth century dome, the concrete dome of the Pantheon in Rome which has a diameter of 43.0 metres. In diameter, it was also larger than the largest dome previously built in Australia, which was the 31.5 metre reinforced concrete dome of the Reading Room of the State Library of Victoria .

The architect Roy Grounds, designed the building to suit the locality. He also stated that ‘the domed shape was a corollary of the rounded hills and mountains that enclose the valley of Canberra’. The building is located on the eastern slopes of the Acton Ridge, in a precinct that forms an interface between Canberra City including the hotel and business buildings east of Marcus Clarke Street, and the Australian National University. The precinct was developed by the Federal Capital Commission with the Institute of Anatomy on the ridge crest and on the lower slopes, hostels and guest houses for use by public servants. The Australian Academy of Science was conceived as an independent national academy and sited between the classically styled buildings of the Institute of Anatomy, Hotel Acton and Beauchamp House. It’s low-rise dome-form creates a unique central feature between the earlier classically styled buildings. The open space areas between the Academy and its neighbours enable the iconographic architecture of the dome with its moat and parabolic arches, to be fully visually expressed. The dome building is a most effective structural solution, that creates and encloses a unit of space as well as emulating natural forms. It is therefore aesthetically comforting and physically stimulating at the same time.